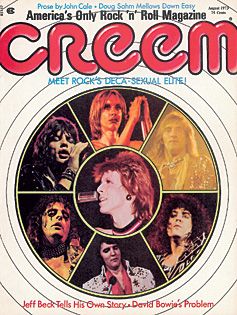 The first copy of Creem I ever bought, August 1973

"Writing about music is like dancing about architecture," Frank Zappa once said. Or was it Martin Mull –or maybe Elvis Costello? Internet pundits have varying opinions on this matter. However, we do know that Frank told a journalist ,"Rock journalism is people who can't write interviewing people who can't talk for people who can't read."


Frank’s quote may actually apply more to current Interweb music news items on Yahoo and AOL than the old-style print mags that inspired his comment. Do we really need constant blog posts about X Factor contestants and American Idol losers flubbing the National Anthem at football games?  It makes me pine for the heyday of my three favorite rock magazines- Circus, Creem, and Hit Parader. 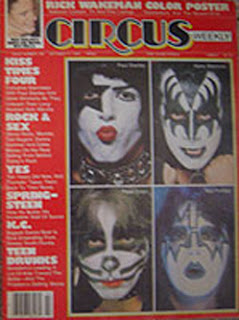 Circus combined mainstream newspaper-type journalism with behind-the-scenes interviews and reportage about rock bands. They weren’t gossipy or dirty. They gave fans straightforward news without much pontificating. The magazine was first published in 1966 under the name Hullabalo, but most people equate it with 1970s and 1980s hard rock and new wave. The weekly magazine covered everything Kiss, Aerosmith, Queen, AC/DC, and Led Zeppelin oriented in the 1970s. Of course, the aforementioned bands shared column inches with any band that had a buzz at a given time. Circus didn’t discriminate based on genre. They were an equal opportunity mag. The March 16, 1978 cover featured Ted Nugent, but prominent articles on the Sex Pistols and the Ramones were also included. It wasn’t unusual to find an eclectic pop culture mish-mash edition with articles  about Dan Fogelberg or Linda Ronstadt, popular comedians and TV shows (Steve Martin, Mork and Mindy, etc.) and controversial movies du jour like The China Syndrome sharing space with the obligatory Kiss article. And this mag had the best posters and full-page photos. After I finished scavenging my favorite articles for pin-ups, there was barely anything left in the mag. This explains why I don’t have any intact copies left to sell on eBay. The magazine folded in 2006 after focusing exclusively on heavy metal and hard rock since the mid-1980s. 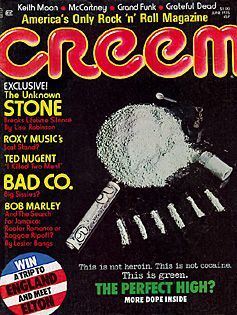 
Creem was a great magazine for suburban teens in the 1970s  It looked like a music magazine, but  it had a lot more than pretty pictures and music reviews. It had dirty words, sexual terms you hadn’t learned yet, semi-nudity, Lester Bangs and drug references. The music reviews read like a combo of Naked Lunch, a pulp men’s mag  and Roget’s Thesaurus. You had to be intellectual and perverted to understand what was going on – a perfect combo for me.  Also, what was that exactly on the June 1976 cover, hmmm? (See above pic.) I don’t think the proprietors of  the local drugstore in Hometown, Ill. where I bought it even noticed it. I hardly knew what it was, but pot and peppermint schnapps were the hardest stuff for a junior high kid in the ‘burbs back then. I learned a lot from Creem, and not all of it music-related. I first discovered  the existence of absinthe, cock rings and bondage gear from Creem. But I first read about the Runaways, Patti Smith, the New York Dolls and T-Rex from Creem while everyone in the neighborhood was listening to Donny and Marie. I read Pamela Des Barres’ column, Miss Eleganza, Creem Profiles, Confessions of a Film Fox and learned all about Rodney Bingenheimer’s English Disco. (Even at 12, I was the resident neighborhood weirdo.) I convinced my babysitter to watch the New York Dolls on Don Kirshner's Rock Concert one Friday, after reading about them in Creem. When I saw her again Monday morning, she was thoroughly befuddled by the performance. “When you said “New York Dolls”, I thought you were talking about a bunch of weird ladies.”


The first copy of Creem I ever bought in 1973 had articles about Androgeny In Rock, Screamin’ Jay Hawkins, Jeff Beck and plenty of pics of glam-era David Bowie, Alice Cooper, Marc Bolan and Iggy Pop. One of the first record reviews I read was by Patti Smith. I couldn’t tell you what band she reviewed, but I sure did like the way she wrote about them. A few years ago, one of my friends showed me an old stack of Creems from the ‘70s and ‘80s. I looked through ‘em, but somehow they didn’t pack the same forbidden punch as they did when I was twelve. By the late ‘70s Debbie Harry ,the Sex Pistols and the Ramones were common subjects, along with lesser-known punk bands that Circus and Hit Parader neglected. (Destroy All Monsters, the Dictators, etc.) Creem may or may not exist today. This New York Times article details the struggle to revive the magazine. Creem’s archives, however, are up and running. 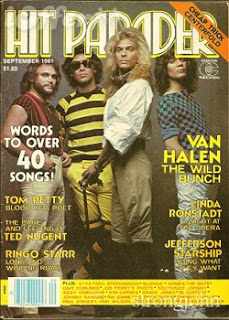 
Hit Parader, first published in 1942, printed popular song lyrics of the day. Even when pop music styles changed to rock, punk and new wave, the mag still published lyrics. Alice Cooper lyrics were far removed from “How Much Is That Doggie in the Window?”, but fans still wanted to sing along. One of the first  Hit Paraders I bought –in ’74 or ’75, had a great interview with John Lennon conducted by Lisa Robinson, one of the most prolific rock scribes of the time.


The photos weren’t as glossy as the ones in Circus, but I still plastered the walls with them, especially in the early ‘80s, when the magazine’s articles seemed to get shorter-only a page or two-with short to non-existent interviews. Like Circus, Hit Parader didn’t take musical sides back then- one month Van Halen was on the cover; the next month, the Clash. It wasn’t a “punk” versus “metal” culture then. It was all good. Once the mid-1980s rolled around, the magazine changed format to heavy metal/hard rock exclusively. It’s the only one of the three mags  that still exists today, with a “none more black” website design and cover stories on Slipknot and similar bands.