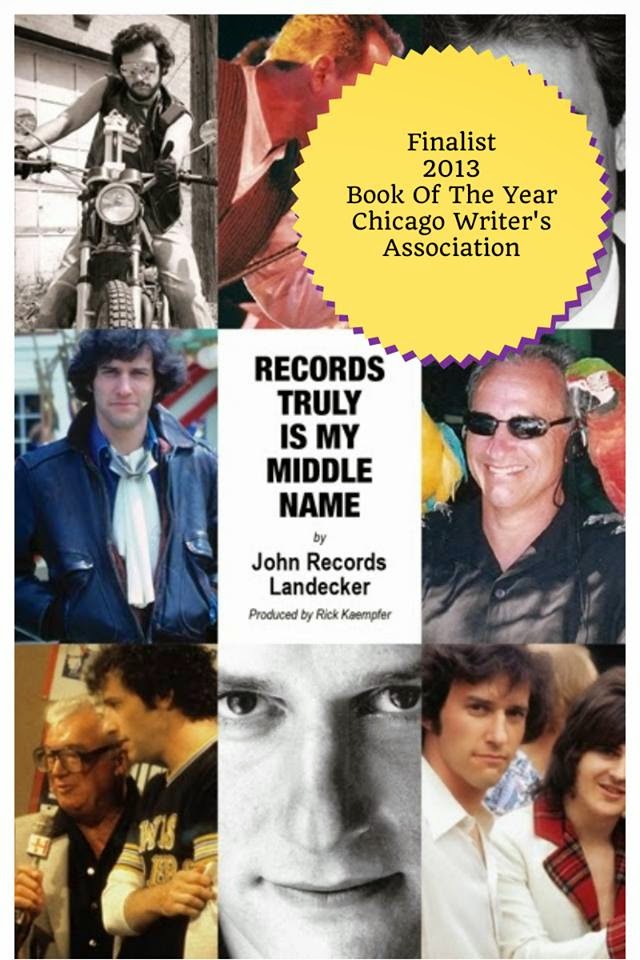 As a kid in Chicago in the early 1970s, I listened to Larry Lujack and his Cheap Trashy Showbiz Report, Klunk Letter of the Day, and sourpuss meanderings. In college in the early '80s, the irreverent banter of Steve Dahl and Garry Meier kept me entertained between classes. During high school in the mid '70s, my radio go-to guy was John Records Landecker, of Boogie Check fame.

In Landecker’s autobiography "Records Truly is My Middle Name"(Eckhartz Press) Landecker explains that, yes, Records is his real middle name, not a stage moniker. He even includes a photo of his selective service card in the book to prove it. John's mother, Marjorie Records, married sociology professor Werner Landecker, so yes, his mother's  maiden name truly was Records, and John incorporated that in his on-air persona. Of course, it sounded too good to be true and  many fans, myself include, surmised it was a stage name.

When your Mom’s maiden name is Records, a career in radio is your destiny. Landecker's first radio gig, in Flint, Michigan in 1965 on a station that required all DJs to use the last name Jones on-air. Naturally, John chose the name Dow Jones. He made his major market debut  at WBIG in Philadelphia from the late ‘60s to the early ‘70s, with  fellow DJs Jerry Blavat (The Geator with the Heater), Hy Lit and Joe Niagara.

Landecker begins each chapter with a round-up of the top events of each decade, setting the backdrop for the revelations to follow.   The book is an engaging read that isn't just for radio buffs. It's a rollercoaster ride through the prime decades of rock 'n' roll, told from the POV of someone who was well-known enough to glimpse the inner workings of rock's hedonistic years, but down to earth enough to retain a realistic attitude for most of the ride..

Landecker’s autobiography entertaining is just as much fun when he focuses on his personal life as when he writes about his radio  shenanigans. Many times, readers of pop culture autobiographies complain about the author including too many personal anecdotes that  aren't as interesting as events in the author's professional life. Landecker’s life out of the broadcast booth is just as  interesting to read as his DJ exploits.’’John's father Werner Landecker, was the last German Jew to earn a law degree in Germany before World War II. Werner immigrated to the United States and married Indiana farmgirl and 4H winner Marjorie Records.. The story of how, they met, stopped at an intersection in separate cars, is a cute meet worthy of a romantic novel. Werner and Marjorie married, and their first child John was born  on March 28, 1947.

Landecker’s  childhood and  adolescence mirrored that of your typical Baby Boomer  He writes about playing football in high school,  being in class when a student-teacher tearfully announced President Kennedy’s assassination. Other, less serious, rites of passage included discovering that the lyrics to Louie, Louie by the Kingsmen were dirty, (The lyrics weren’t actually dirty. It was an urban legend), and  watching the Beatles - and Mitzi Gaynor in a low cut dress - on the Ed Sullivan Show in 1964. As the book moves on, we learn about Landecker's tumultuous second marriage to a hellion named Paula and his financial victimization at the hands of a once-trusted manager.

Landecker’s  halcyon years at WLS in Chicago  from 1972 to 1981. During his signature bit, The Boogie Check, he fielded calls from listeners unafraid to be goofy. Landecker outdid them at their own game with glib comments. Spinning Seasons in the Sun,  Eres Tu and other cheesy Top 40 songs would bore anyone, so the DJs had to be wacky to keep  listeners interested – and keep themselves from falling asleep!  Personality based radio flourished at this time, featuring bits that entertained in a wink-wink-nudge-nudge way; shock jocks had  yet to take over the airwaves. Landecker’s fellow DJs at WLS included Larry Lujack, Fred Winston and Bob Sirott.

Studio A: Profile of a Disc Jockey

Landecker recorded two comedy singles, Make a Date with the Watergate and Press My Conference,  poking fun at President Nixon and the Watergate scandal. Make a Date was a parody of Lou Reed's Walk on the Wild Side. Despite being big hits with listeners, the songs were temporarily shelved when an ABC affiliate in Florida, up for license renewal, freaked out over their (relatively innocuous by today's standards) content.

During Landecker’s tenure at WLS, other highlights included a personal appearance with John Travolta  (then a teen idol as Barbarino on Welcome Back Kotter) at a suburban Chicago shopping mall.  The promo drew 30,000 screaming teenage girls. I remember hearing the broadcast live that night. It sounded like a 747 taking off. Many of the bands of the time  stopped by, co-hosting and commenting on records, and Landecker premiered Lady by Styx on his show, the song that propelled the band to stardom.

Like many other DJs and musicians,  Landecker fell prey to rock ‘n” roll excess. He woke up one day on a flight over the Grand Canyon with no recollection of how he got there. His drinking escalated to the point where he drank vodka openly in the studio. He divorced his first wife (his high school sweetheart), married a trophy wife, then a much younger woman, before marrying his fourth wife and soulmate Nika.

After leaving Chicago for a gig in Toronto,( followed by an unsuccessful return to Chicago radio) Landecker hit rock bottom with alcohol and drugs. After conquering his demons, he reemerged on Chicago radio, settling in with a well-received shows on WJMK, a  band  and a syndicated  show called “Into the 70s” for TKO Networks. He is currently broadcasting on WLS-FM (Chicago’s Classic Hits) weeknights from 8pm to 11pm.

Records Truly is My Middle Name is sure to stir great memories for Chicago radio fans who grew up in the 1970s, or any Baby Boomer who grew up on AM radio.

Press My Conference and Make a Date with the Watergate