James Scurlock’s documentary Maxed Out is an in-depth and much-needed look at  the rampant use and abuse of credit cards in America. The cast of characters in the film provides a shocking look at how segmented America has become. There are, for example, the poor and middle-class subjects and interviewees. This group includes the poor rural family whose mentally challenged son is coerced into signing a document for a mortgage by an overzealous financial consultant for a major bank. Then there are the college students and housewife who committed suicide due to harassment by bill collectors, and the farmer’s wife who has fought, unsuccessfully, for years to rectify a clerical error.

Conversely, there are well-to-do folks on the other side of the fence. The film begins by showing us a Las Vegas realtor with her Stepford wife home/family/prefab community and odd Enron-type financing methods. Moving on to the Midwest, we see a group of squeaky clean, young blonde bill collectors who cheerfully admit they call the neighbors of people who owe credit card bills to shame them into paying.

Maxed Out brings to the fore many issues not commonly touched upon in the media, including, but, not limited to shady banks and credit card companies. Perhaps the consumerism that runs rampant in American life is just as responsible for the financial bind many folks find themselves in. But with many Americans lacking medical insurance, a large of people now have no choice but to pay necessary expenses like medical bills via credit cards-and they find themselves unable to pay the credit card bills when they arrive. Ultimately, though, it’s the banks and credit card companies who tack on “mystery charges” and high interest fees that, ironically, hurt the working-class and middle class more than people who could easily pay the exorbitant charges.

The more hard-assed and logical among us would say, “Well, it’s their own damn fault, blah blah.” But say that to an alcoholic or drug addict surrounded by enablers. And, as Maxed Out shows, credit card companies are enablers. What’s the point of offering credit cards to college students who’ve never held a job? I suppose the companies think the kids have well-heeled parents who’ll pay the bills for them?

Most frustrating of all, the film reports, is the fact that when Congress held hearings on the credit card industry in 2005, the financial big-wigs didn’t have to answer any questions about their practices. As they say, money talks. Maxed Out poses more questions than it answers, but they are tough questions that affect the very fabric of American society.

False Alarm- Another L.A. Punk Rock Band You Should Know 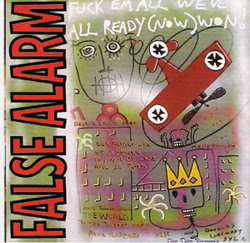 False Alarm follow the path of so many other L.A.punk bands that first formed in the early ‘80s. On and off gigs , drugs, alcohol, disasters, the early death of one of the members. (False Alarm’s singer/guitarist, Dylan Maunder (D-Rock), passed away in 2005.) Now some of the band’s original songs are out on the new CD, Fuck Em All, We’ve All Ready (Now) Won!
False Alarm’s sound is part Social Distortion, part New York Dolls, with a dollop of Dead Boys added for that extra kick. The raw material is edgy, early 80s’ soundin' Cathay de Grande era punk, and the polished production of the ‘00s emphasizes songs and melody rather than attitude. Luckily, both are evident in the finished product. This effort, compiled and produced by bassist Brent Alden and guitarist Paul Kostabi, revives the band’s career with a 14 track CD on their own False Alarm label.
There are a few interesting notes about some of the present and former band members. Paul Kostabi, the band’s guitarist, is also a painter and brother of Mark Kostabi, Axl Rose’s favorite artist back in the day. (That’s Mark Kostabi’s painting on the cover of Use Your Illusion.) Fat Mike played guitar for False Alarm in 1983 before joining NOFX, and one of his live performances is included on False Alarm’s first CD. And one of Dee Dee Ramone’s paintings is the cover art.
On F ‘Em, most of the songs are written by Brent Alden and Dylan Maunder. From the opening guitar riff of Horrible Life to the ’77 garage punk sound of I Don’t Want To Be Your Friend, the frenetic pace never weakens. In addition to the songs that feature Maunder on lead vocals, there are 3 notable guest appearances - Rick Wilder (Maus Maus, Berlin Brats) sings the Dolls’ Vietnamese Baby, De De Troit of UXA performs In My Mind and Cheetah Chrome sings lead on High Tension Wire and plays guitar on several other songs. False Alarm is yet another hidden treasure in the ever expanding L.A. punk rock chronicle. Go to www.myspace.com/falsealarmrecords for more information.