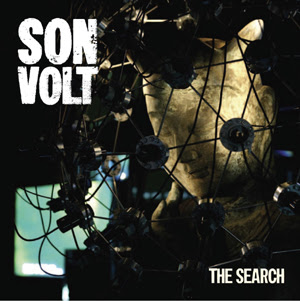 While ex-Uncle Tupelo bandmate Jeff Tweedy has the upper hand on sorrow with Wilco, Jay Farrar is not far behind with the themes of lost love-and a lost society-on The Search. Son Volt’s first album since 2005’s Okemah and the Melody of Riot is no groundbreaker, but it has its moments.

Slow Hearse kicks off the melancholy spree with sparse cymbal crashes and equally sparse piano. This dirge is Abbey Road meets alt-country, as our protagonist is “driving around in a slow hearse.”

But don’t break out the razor blades just yet. On the upbeat, croaky Dylan meets Counting Crows vibe of The Picture follows, complete with optimistic, totally out of character Stax horn section.

Action is a jangly, almost danceable folk. Farrar’s voice pretty much stays in monotone mode, sometimes mumbly, sometimes clear and a tad more buoyant, but the music dictates the mood, not the vocals. The wispy demeanor of the haunting Underground Dream comes the closest to being the album’s “masterpiece.” Circadian Rhythm is full-on mumbling country grunge, with Farrar’s drawl morphing into sedate Neil Young mode after awhile.

The songs on The Search are not primarily concerned with drinking and lost love; Farrar addresses modern-day complacency, apathy and the Iraq War. In Beacon Soul, he asks "who the hell is Dow Jones anyway?" Adrenaline and Hearsay’s barren piano and Farrar’s plaintive voice are the dour opposite of the next song, Satellite, where Farrar proclaims “we’ll find a way. Automatic Society is a “you want fries with that?” indictment of today’s “nothing matters” society.

Son Volt is back in fine form after hiatus during Farrar’s solo stints. Bassist Andrew DuPlantis and drummer Dave Bryson supply the effective but sparse rhythm section, a perfect match for Farrar’s vocals. The slower tunes on The Search may sound redundant, but overall, it’s a triumph for alt country pioneer Farrar.