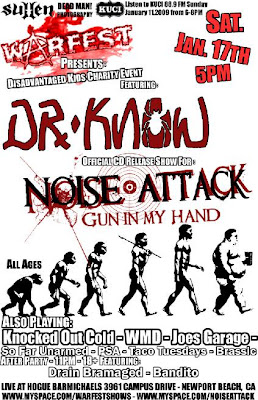 Tonight (January 17th) at 5 pm, 11 bands, including Dr. Know, will perform at a benefit concert and punk rock fashion show at Hogue Barmichael's in Newport Beach. The event will raise money for a community church in Fullerton and their efforts to help disabled kids.

Organizer Jason Roberts of Warfest Shows, who has put together other charity concerts and events featuring punk rock bands in Southern California for several years, is looking forward to the concert. The show will offer a bit more than the usual hardcore punk bands.

“We’re going to try something new - a punk rock fashion show. Everybody’s kind of excited about that.” Local punk-oriented clothiers will donate the fashions. “I have clothing sponsors that get involved with our events all the time. One of them is Sullen Clothing , an Orange Country clothing company. They’ve made a name for themselves worldwide. They’re doing really well now, so they’re giving back to some of the people who supported them such as myself. I’ve been doing events for them for 10-15 years, supporting their company, so they’re one of the companies that’s donating clothes. Then I have another company from the Valley coming down, Hardcore Clothing , supplying clothes to the event. I’ve got 15-20 models that are basically going to be wearing those clothes. I’ve brought in a professional fashion show coordinator to coordinate the actual event.”

“The girls that I’ve talked to are really excited about the event. Some of them are punk rock girls and some of them are not punk rock girls. The ones that aren’t are excited because they get to get all dressed up, put their hair in a Mohawk, maybe put temporary dye in their hair or something else to have a crazy look when they’re on stage. It should be interesting.”

What can music fans expect at the show? “So even though its (Hogue Barmichael's capacity) only 400 people, we kind of set it up like a festival event,” says Roberts. “There's one band that’s on there, the headliner that’s Dr. Know and the singer is Brandon Cruz. He was a childhood actor, and he was also famous for he also filled in for the other singer of the Dead Kennedys and now he’s back in Doctor Know. He’s been actively involved with charitable events too including last year's Surfrider Event, which was very successful. We’ve got 10 other great bands performing. Another band that’s been around for a long time is Drain Bramaged . They’ve been playing around southern California for 20, 25 years years.”

Roberts, who has experience working for Ozzfest, the Jagermeister tour and many major label bands, started Warfest Shows as a way to help local non-profits and others in need, “to give something back through charity events.” Inspired by the late Steve Irwin, "The Crocodile Hunter", Roberts organized charity events for the Surfrider Foundation , the Pacific Wildlife Organization, KUCI (UC Irvine's radio station) and other charities last year, and plans to coordinate more Warfest events this year. A national Warfest tour is also a possibility.