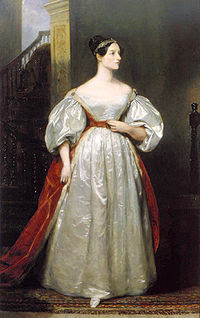 Ada Lovelace, the daughter of poet Lord Byron and Anne Isabella Milbanke, overcame severe headaches, measles and other illnesses as a child and developed a remarkable capacity for mathematics as a teenager. She wrote a description of Charles Babbage’s prototype “analytical engine” in the 1840s, and also devised a calculation sequence for the machine. Babbage’s analytical machine, aka the first general purpose computer, remained partially completed, so Lovelace’s “computer program” was never used. However, she’s widely credited as the first computer programmer.

While computer programmers, engineers, network administrators and IT executives are still predominantly male, there’s a quiet movement to increase the number of females writing software programs, video games and tackling other jobs involving binary code, UNIX, LAN, and security firewalls. More women than ever are enrolled in computer courses at four year colleges or technical schools like DeVry. To find out more about women in technology, go to the NCWIT (National Center for Women and Information Technology) webpage for resources and links.

While the number of women who work in technology-related professions is small but growing, the number of female-owned IT companies is minuscule. But even that’s changing. Computer Divas, established in 2004 by Mary Spencer of Flushing, New York, offers IT services for local and national clients without succumbing to the typical computer geek image. After all, computers and technology are a part of everyone’s lives. Why should it be still be co-opted by skinny nerds in flood pants or white-collar men? As Ada Lovelace proved in the 1800s, a classy, stylish woman can write a computer program just as well as any guy.
Posted by JadeB at 1:19 PM No comments: