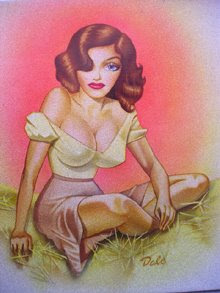 Dale Sizer has worked on animation for Hanna Barbera, Disney, Warner Brothers and other clients. His drawings and paintings, including acrylic on metal flake vinyl pieces depicting glamour icons and cute but quirky looking doggies, are heavily influenced by film noir and old Hollywood. I recently talked with Dale about his background and influences.


Where have we seen your artwork before?

I’ve shown it at M Modern in Palm Springs*, and in Las Vegas and Seattle at the Roq LaRue Gallery and San Francisco. But mainly they’re on my website or as illustrations somewhere.

What influenced you to become an artist?

Can people buy prints of your work?

I don’t have any prints available at the moment. I need to market myself like that but I haven’t gotten it together.

What inspires the subjects of your paintings? Are there different things at times, or do you have a specific source of inspiration?


I love old movies, especially the film noir styles and the color ones as well. I just like beautiful imagery and it just goes back to kind of a retro style of painting women, I guess. Some other contemporary artists are inspirational, they’ve influenced me. But I think I’m one of the few people who is doing what I’m doing. At least I don’t see that much of it, where people are doing sexy pin-up stuff and noir-ish stuff. I’m sure there are, but just haven’t seen it that much.

The whole retro burlesque look, though, is very popular with young models and photographers in L.A.

There’s kind of a big retro model pin-up thing going on and a lot of girls who love to dress up and look that way and a lot of photographers that like to capture that whole thing, but I don’t see a lot of actual painting going on.

*As part of the Pussycats, Dolls & Vixens: Tribute to Russ Meyer Exhibit