Theater Review: U.S.S. Pinafore: An Outer Space Operetta adapted from the works of Gilbert and Sullivan 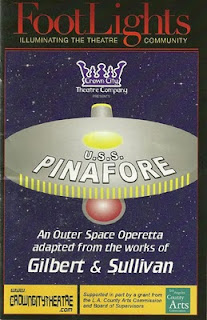 Gilbert and Sullivan’s H.M.S. Pinafore translates into a sci-fi setting admirably in Crown City Theatre’s production of U.S.S. Pinafore. The concept seems wacky, but it works seamlessly, courtesy of a stellar cast and behind the scenes crew. From the first musical number “We Fly the Sky So Blue” to the finale, it’s obvious the performers are having a blast with the material, and this delight certainly infuses the audience as well.

Key cast members include Jesse Merlin as the Pinafore’s floundering Commander Corcoran, who schemes to arrange a marriage between his daughter Josephine and the powerful Head of the United Federation of Planets. Gilbert & Sullivan’s Buttercup takes on the persona of a kindly alien (Kathi Chaplar) and the smartass ship computer (voiced by Jason D. Rennie) provides sassy comebacks to the goings-on. “The Trust Fund Girls” Jebe, Phoebe and Hebe (the colorfully bewigged trio played by Paton Ashbrook, Misha Bouvion and Victoria Gonzalez), and the ship staff are all equally talented. This truly is an ensemble cast where each member is a joy to watch. Ron Schneider kicks the action into a new direction near the end of the first act as the smug Sir Joseph (aforementioned head of the United Federation of Planets) who assumes he’s a lock as Josephine’s future hubby. He brings a bumbling comic energy to his role.

Aidan Park, as lowly Transporter Assistant Ralph Rackstraw, secretly admires Josephine (Ashley Cuellar), the Captain’s beautiful daughter. Except for bad guy/Lizard Man Dick Deadeye (James Jaeger), all the crewmembers hope the couple will get together permanently. Park and Cuellar are totally convincing as the star-crossed lovers. Their mix of naïve charm and comic timing will have audience members rooting for them throughout the play.

U.S.S. Pinafore is sure to keep a smile on your face throughout the entire play . John Mullich’s picture-perfect adaptation and direction fuse Gilbert and Sullivan’s operetta and Star Trek-esque characters into a charming romantic comedy that stands on its own.