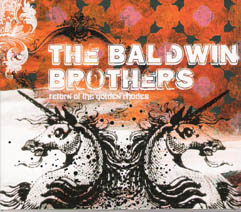 The Baldwin Brothers
Return of the Golden Rhodes
TVT

No, Alec, Stephen, William and Daniel have not followed the Bacon Brothers lead and formed a band. These Baldwin Brothers are not actors but two childhood friends/musicians from Indiana, Jason Hinkle and TJ Widner. They specialize in jazz/electronica or “junktronic” music. A hybrid of indie pop, funk and electronica that combines influences as divergent as 70s funk, Kraftwork, the Beastie Boys, and Herbie Hancock. Golden Rhodes is the follow-up to the Brothers’ acclaimed 2002 CD Cooking With Lasers.

On Return of the Golden Rhodes, this junktronic vibe is the hippest easy listening music you’ve ever heard. While this eclectic pop/ jazz hybrid may confuse some listeners used to a straightforward approach, the more adventurous are in for a treat. The building blocks of the Baldwin Brothers sound are bass, drums and synthesizers, with occasional turntables and trumpets for embellishment.

The space-age drum ‘n bass of Right On sets the album’s trippy vibe. The laconic under the strobe lights trance of Just Me (On The Dance Floor) has a generic dance club feel. This sound morphs into an early ‘90s hip-hop groove on A Matter Of Time, which features guest rapper Sarai. Other guest vocalists are Lisa Kekula (BellRays) and Mark Lanegan (Screaming Trees). Kekula’s turn on Leave The Past Behind is an upbeat and near perfect example of “smooth jazz”. Mark Lanegan’s subdued, almost whispered vocals on the somber The Party’s Over close out the album.

At the very least, Golden Rhodes offers pleasurable and unobtrusive background music. It doesn’t provide beats you can really sink your teeth into, but it’s catchy and user-friendly. The Baldwin Brothers’ funky, light-hearted approach to indie electronica puts them in a league of their own, and I wouldn’t be surprised if their popularity expands out of the Mixer Mag crowd and into the mainstream.