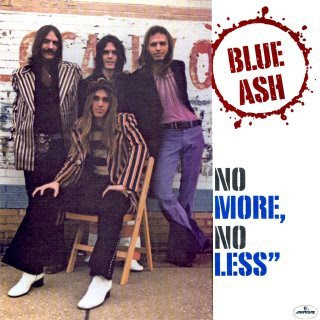 The Blue Ash story is one of rock’s best kept secrets. Formed in Youngstown, Ohio in 1969, Blue Ash were a powerpop outfit in the same vein as Cleveland’s Raspberries, albeit with a harder edge. Of course, the term “powerpop” hadn’t been coined yet; then it simply meant good pop music. Blue Ash and the Raspberries played on the same bill often back in Ohio. The band’s name is taken from a real town in Ohio, though none of the members were born or raised there. Four long haired guys done up all nice, in striped jackets and white ankle boots, Blue Ash countered the disheveled hippie look favored by Midwestern rock bands at that time.

Mercury Records won a bidding war, signed them, and the underground classic No More No Less hit the shelves in 1973. Collector’s Choice recently rescued the album, out of print for over 30 years, from obscurity with a CD edition. Even a cursory listen of No More, No Less makes one wonder why the album wasn’t all over the airwaves in ‘73.

“Abracadabra (Have You Seen Her?)” is a crossbreed between garage rock and frilly power pop that served as a precursor to bands like the Nerves and the Plimsouls. (The Records included it as a bonus track on one of their albums). Singer Jim Kendzor alternates between effortless, uptempo delivery and emotive wailing to make the tune something special. The song has a timeless quality that surely sounded as good crackling though a transistor radio as it does streaming through an iPod. Where were these guys when the radio audience at large was force fed a steady diet of Lobo, Helen Reddy and Cher doing cheesy story-songs like "Dark Lady"?

“Dusty Old Fairgrounds” a previously unrecorded Dylan song when Blue Ash adapted it for No More, No Less. For a Dylan song performed by Blue Ash, it sure sounds like the Who! Drummer Dave Evans exudes Keith Moon frenzy on this one. You could slip it right at the end of Meaty, Beaty, Big and Bouncy without disrupting the flow. “Just Another Game” has country pop undertones more reminiscent of the The Byrds than any of Blue Ash’s power pop brethren. The catchy "Plain to See" has one of those choruses that gets stuck in your head, with a pop sensibility that captures the essence of bouncy and melodic Brit pop bands from the Searchers to Freddie and the Dreamers. Likewise, the wistful lyrics of “I Remember a Time” wrapped in a bright, sugary base of smooth harmony vocals and jangly guitar.

Blue Ash had the (mis)fortune of being signed to Mercury by Paul Nelson shortly after the stiletto heeled appearance of the New York Dolls on the same label. Blue Ash toured around the States, opening for iconic acts like Aerosmith, Ted Nugent, and Iggy and the Stooges to support the album. No More, No Less made many critics’ Top 10 lists for 1973. Chicago Sun Times writer Bob Greene championed them in his column a few times and named them the best American band of the 1970s. Bass guitarist Frank Secich begins the reissue’s liner notes by mentioning Greene’s penchant for the band. None of the buzz impressed Mercury, and they dropped the band shortly thereafter. After a few singles and another album on Playboy Records, followed, but soon that label folded.

The band continued to write and record until 1979, many of the songs contained on the Not Lame compilation Around…Again covers the band’s 10 year history. Blue Ash called it quits at decade’s end with over 200 songs written and/or recorded. A sidenote- Blue Ash bass player Frank Secich played on fellow Ohioan Stiv Bator’s solo album Disconnected and also contributed a solo song to a Stiv Bators tribute album out of Italy. Luckily, Blue Ash are back together, currently playing shows in Ohio and Pennsylvania. They even have their own blog and MySpace. The reissued No More, No Less is selling briskly on Amazon.com, proving that it’s never too late to pick up where you left off.
Posted by JadeB at 5:12 PM