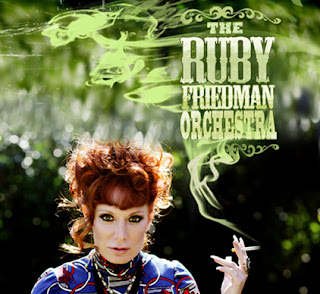 When you take a skilled female vocalist and back her up with talented rock musicians, that combo can get lost in crowd if it’s not peppered with that “something extra.” After all, how many hotel lounge bands and “American Idol” contestants have trained voices, good back-up musicians, and no pizzazz?
The L.A. based Ruby Friedman Orchestra takes the above-mentioned formula and shakes ‘n’ bakes it into a bluesy rock spectacle. There are a few things that differentiate redheaded sparkler Ruby from the current crop of “technically adept” female vocalists. Ruby has a sharp sense of humor and quirky intelligence that comes through in her songwriting and live performances.  (Some of her songs concern subjects as diverse as transcendental meditation and suicide.) Ruby draws from a variety of musical influences. Bessie Smith is one of her vocal idols. And one of  RFO’s show-stoppers in concert is a soulful cover of the Beatles  “I Want You (She’s So Heavy).”
RFO plays L.A. haunts like the Hotel Café, the Mint , and the Echo, where Ruby’s voice alone seems too big for the venue. Bigger things are on the horizon, though.  The band’s song “Shooting Stars” was prominently featured on this year’s promos for the TV show “America’s Got Talent.” A fave of legendary DJ  Rodney Bingenheimer, RFO’s song “Burning Skies” has also rated highly with listeners of KROQ’s “Locals Only” show.  The band’s currently recording a full-length CD.
The Ruby Friedman Orchestra plays Friday, November 12, 2010 at the Sunset Room (behind Amoeba Records) in Hollywood.
http://www.myspace.com/rubyfriedman
Posted by JadeB at 2:31 PM