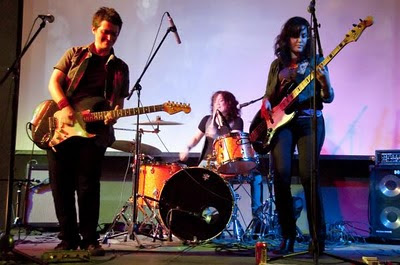 EZ Tiger, a three-piece alt rock band from L.A.,. features singer/guitarist Tina DiGeorge, bass player Anna Rosales and drummer Kristy McGinnis. On their self-titled debut CD, this trio creates a sound that’s more pop/rock than indie hipster. Some of the songs,  like the haunting Any Other Day and Stay, a lovely pop ballad that would definitely earn the term “radio-friendly” in the days when radio actually played good music,. remind me of hit tunes from  many late  90s pop/rock bands Groups like Everclear, Dishwalla and  Del Amitri produced  catchy songs that were just “right” – they weren’t entirely light rock, but not really alternative either. EZ Tiger’s music has this same template. Their songs have clear melodies, concise lyrics that can appeal to a wide range of listeners without seeming too diluted, and strong, appealing vocals That’s not hard to fathom when you find our EZ Tiger was produced by Brian Wilson’s keyboardist Scott Bennett..  The songs ring through flawlessly, with an even-handed mix that doesn’t favor any aspect of the material over another.
Don’t let the Dishwalla reference make you think EZ Tiger doesn’t offer some outright, in-your-face rock. The best song on the CD, Dancing for Dimes, has a menacing punk rhythm and a tasty guitar outro by DiGeorge.  It demonstrates that EZ Tiger can turn up the heat and channel the Buzzcocks as convincingly as they can perform sweeter, more introspective  material. Last One In has a wonderful, danceable energy to it with a bit of a ‘60s Mod vibe.
EZ Tiger is a pleasant surprise. Their songs aren’t tied to any one genre or fad – they stand on their own. The band plays at the Redwood Bar in downtown L.A. on February 13th..
Posted by JadeB at 1:30 AM