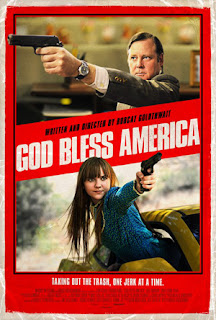 A biographer once commented, “We idolize people who we want to imitate,” If that’s the case, mainstream is worse off than one could ever imagine. Judging by the still-skyrocketing ratings for the Kardashians (they got renewed again) and other trashy reality shows, America is so dumbed down there’s nowhere left to go but down “the road” described in Cormac McCathy’s bleak novel.

Such scenarios have attracted the ire of director Bobcat  Goldthwait, former screechy-voiced standup comedian and director of the cult favorite Shakes the Clown.  With the satire God Bless , Goldthwait has created another quirky underground film. This one, however, deals with subject matter more serious than inebriated clowns.

Disenfranchised loner Frank (Joel Murray) is divorced from his wife, estranged from his daughter, and has just lost his job at an insurance company   After being diagnosed with a fatal brain tumor, Frank sets out to off himself in front of the TV. He sees a My Super Sweet 16 type show  as spoiled brat Chloe bitches at he parents for not buying her an Escalade for her birthday. Frank, disgusted by this arrogant display, and all the oafish behavior he has encountered, snaps, like the blue-collar version of William Holden in Network.  He’s got a reason to live now, and he sets out to rid the world of awful brat Chloe and other boorish types. While offing Chloe, he encounters her droll classmate Roxy (Tara Lynne Barr) , and the two set forth on a cross country mission to eradicate a slew of rude and crude poseurs.

God Bless  pursues the same territory as Mike Judge’s Idiocracy, albeit in a real-time setting. The harmless nimrods of Idiocracy have been replaced by an American landscape inhabited by plenty of crass morons, mostly unseen. Frank and Roxy’s conversations are as much a part of the film as the gunplay. Frank attempts to explain the base nature of the American Superstarz show to a brain-dead fellow employee near the film’s beginning. His diatribe goes on too long, but it’s cathartic to hear a film character express the disgust many of us have felt since reality and (no) talent TV shows took over the airwaves.

Frank and Roxy track down another member of their hit list, a conservative radio talk show host,.“Why do you have to be so rude to people?”  Roxy says. The specter of self-absorption and rudeness is the enemy here.  God Bless  isn’t a politically-driven revenge fantasy. Even though a few of Frank and Roxy’s targets are conservative, it’s more about the lack of civility used in expressing the beliefs than the beliefs themselves. Other targets include people who talk on their cell phones in movie theaters, rude drivers, and the . The body count isn’t as large as you might expect from the ominous pic of the gun-toting duo on the movie's poster.  Frank and Roxy are the smart person’s Bonnie and . The violence is ultimately balanced by the articulate self-awareness of the lead characters. A slap-happy bloodfest this is not. Isn’t that the behavior the film is protesting? The movie is not without its twists and turns, but I won’t reveal any spoilers here.

After taking umbrage at the way a William Hung type character is being treated on the American Superstarz show, Frank and Roxy head to to exact revenge.  This sets up the film’s climax in the belly of the beast where they come face-to face with the faux American Idol’s washed-up judges and hypocritical audience.

God Bless ’s theatrical release is  playing in a handful of art house theaters across the country. It’s playing at the Downtown Independent in til May 17th.  God Bless  is a not so gentle reminder that we are in a pop culture Dark Ages. It’s about time more people stand up and actively create a Renaissance - just not with firearms.