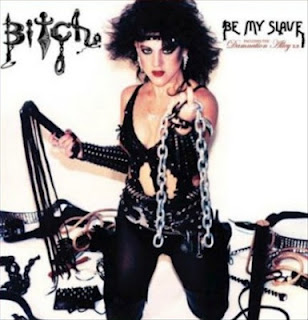 Speaking of S&M, the bookstore isn't the only place you can find whips and chains in pop culture. Let us return to the days of black leather, Aquanet and the Sunset Strip for awhile to  reminisce about Betsy Bitch, one of the few female vocalists on the Southern California metal scene in the 1980s. Along with her band, Bitch, she provided a small but loyal contingent of L.A. thrill-seekers a dose of crunching metal guitars accompanied by sometimes naughty, sometime laughable S & M theatrics. Such a stage show was  de rigueur for L.A. bands in the hedonistic '80s (WASP, Motley Crue, the Mentors, etc.)

After signing with Metal Blade in the early 1980s, Bitch released an EP, Damnation Alley and a full-length album Be My Slave. The band also made a few videos featuring highlights (or lowlights, depending on your point of view) from their stage show. Needless to say, these videos never made it into heavy rotation on MTV. They were fun to watch on local L.A. music video shows, way after hours, though.

After an unsuccessful attempt to cash in on the pop-metal bandwagon, with 1987’s The Bitch is Back and 1988’s  Betsy, the band went back to their hard-edged roots with subsequent releases. Bitch toured Europe with the band Anger as Art last year.

You can find out more about Betsy at Betsybitch.com (an unofficial fan site)  and her official blog Bitchmetal.com.