Looking Back and Living in the Now: Good Times and 50 Years of the Monkees 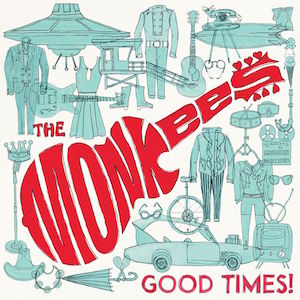 I found a copy of Spy magazine from the mid-1990s when I cleared out some storage boxes the other day. Spy was a nothing’s sacred snarkfest for the hip cognoscenti of the time. I don’t know why I kept this particular issue – probably some tenuous connection with someone who worked there, or who was related to somewhere who worked there.  I flipped through it, chuckling at some of the irreverent skewering of public figures and fads. That is, until I got to a page containing a calendar of “The Worst Events in History.” The calendar included events like the Hindenberg explosion, the Titanic, and "on December 30th, Davy Jones was born in ".

I tossed the magazine. (Yes, I know. It's all a hoot til they make fun of someone you like.)

Davy Jones was to snarky music people of the ‘60s –‘00s what Justin Beiber is to today’s snarky crowd. A convenient teenie-bopper idol and scapegoat for all that was (perceived to be) uncool, Davy and the rest of the Monkees were relegated to the remnants table of musical history for a long time after the TV show ended.

They were “the pre-fab Four, they don’t play their instruments, they don’t have any talent, blah-blah”. Reality proves the nay-sayers wrong on all counts. Davy Jones and Mike Nesmith had solo recording contracts before they were Monkees. Micky Dolenz played in a band and recorded a few singles, and Peter Tork was a folk singer in . Of course, other musicians (Frank Zappa, Jerry Garcia, etc.) defended them. They hung out with the Beatles. Tork introduced Buffalo Springfield at Monterey Pop and dated Janis Joplin.

Oh, and let’s not forget “Headquarters” the Monkees’ third album. Fed up with not being allowed to contribute more than a few self-penned songs or play their instruments on their first two studio albums, they rebelled. In a defining moment that would do a punk rocker proud, Mike Nesmith punched a plasterboard wall in a Beverly Hills Hotel room during a meeting with musical director Don Kirshner. He told Donnie (allegedly) “That coulda been your face, motherfucker.”

Kirshner went on to the Archies, and Headquarters went on to top the Billboard charts upon its release in May 1967 – until the Beatles Sergeant Pepper usurped it the following week.

Still, some people persisted in trashing them.  And this continued throughout the 1970s, where any mention of the Monkees as an entity was greeted with a snicker, except by loyalists and young kids who watched Saturday morning reruns of the show.

This changed after the 1986 reunion. And even the reunion was short-lived in the mainstream. By the end of the 1980s, interest had waned for all but the loyal fans. Micky, Davy and Peter continued to tour as the Monkees for the next few decades. Mike joined them to record the Justus album (and tape a TV special) in 1996,  but both projects failed to capture the public's interest.

P.S.- I still think “Regional Girl” would been a hit in ’96 if the Monkees had used a cloaked advertising campaign ala the Alarm  and used a young band in the video.

Fast forward to 2016. The Monkees and Rhino release the album Good Times. Produced by Adam Schlesinger of Fountains of Wayne, with new songs written by Rivers Cuomo, Andy Partridge,  Ben Gibbard  and Noel Gallagher/Paul Weller. All cool young –ok-middle aged guys - with a bunch of indie cred. Micky sings with his old Hollywood Vampire buddy Harry Nilsson, through the miracle of digital technology on the title track.  There’s a reworked versions of Davy singing “Love to Love”,  Peter singing “Little Girl”, a song he originally wrote for Davy, and  the album-closing “I Was There (And I’m Told I Had a Good Time),” based on one of Micky’s stock interview responses.

Ben Gibbard joins Micky to sing Me & Magdelena in

The release of Good Times coaxed out older Monkees fans who had remained undercover for years. It debuted at #14 upon its release in May the band’s highest charting album since 1968, and was #1 on Billboard’s vinyl release chart.

Legions of fans have now joined social media regulars to post about their love for the Monkees. The fandom-oriented site Tumblr is full of teens and twentysomethings who like the Monkees.  The Tumblr fandom was at its peak for a year or two after Davy died, and leveled out to a calmer pace for this year’s 50th anniversary. Now, Facebook and Pinterest host the brunt of Monkees’ photos and discussions.

To accompany the album and Monkees renaissance, a slew of books about the band have been released in the past few years The most recent, The Monkees, Head and the ‘60s by Peter Mills, examines the movie that closed out the bands’ first era and all the events of the 1960s that influenced its making and the TV series.

A Little Bit Me,A Little Bit You: the Monkees from a Fan's Perspective by Fred Velez is a memoir by a lifelong fan of the group.Interview with the author here.

Why The Monkees Matter: Teenagers, Television and American Pop Culture by Roseanne Welch gives an academic look at the TV show and the Monkees phenomenon.

Monkee Magic: a Book about a TV Show about a Band by Melanie Mitchell is a fun look into the specifics of each episode, with no wardrobe choice or co-star left unexamined.

A few weeks before the Monkees, I mean Twokees, show at ’s Pantages Theater, the band announced it would be Micheal Nesmith’s last live performance as a Monkee. Tickets for the show, which were already scare, disappeared.

I attended the show, and it was truly sold out. I spied not one empty seat. People flew in from , , and all points in the , and the crowd was in a boisterous mood.

Micky, Mike and Peter took the stage and, after a preparatory huddle, the band blasted into” Last Train to ”. There weren’t any obvious references made about the show being Mike’s last.

Despite their ages (Peter’s 74), you get the feeling they’ll keep going, together or separately, til they’re 100, or maybe 105 in Micky’s case. (He just keeps going and going like the Energizer Bunny.) It’s hard to believe any concert by any boomer artist is actually the last one. How many last tours have we seen from the Who, Kiss and Black Sabbath? With 20 years of farewell concerts under our belts, how can we believe anyone’s proclamation that this will be the last concert? It’s not over until someone’s dead and buried, and even then, their holograms make an appearance.

Clips from the episodes played on the screen in the background; it was hard not to take your eyes off the stage for a sec and look. (I saw Peter sneak a peek a few times.)

Highlights - A softer, reworked version of Sometime in the Morning leading into Mike and Micky’s voices blending perfectly on the haunting Me and Magdalena.

Micky, Mike and Peter and the crowd at the Pantages singing the chorus to Daydream Believer as the Rainbow Room video of the song - with a recording of Davy singing - played.

Mike singing a heartfelt version of Tapioca Tundra and talking about what inspired the song (the band’s first live show in ).

The energetic versions of "Listen to the Band", "Circle Sky", "Mary, Mary" and "Do I Have to Do This All Over Again?" verged on hard rock. The back-up band really cooked on these songs, and the guys belted out the vocals with gusto. How is it that the guys are in their early 70s and their voices are stronger than ever - even Peter!

In the lyric booklet for Good Times, Gibbard wrote “I spent countless hours in front of the TV in the ‘80s, watching Monkees reruns and wishing I could climb through the screen and be with them.” There’s not much difference between what a young, non-musician girl in the ‘60s or a young, musically inclined guy in the ‘80s felt when watching the show or listening to the music. When I was a kid watching the original broadcasts in the 1960s,  I hated it when the show ended. I wanted to go live with the band and share their adventures with all week.

The Monkees deserve to be in the Rock ‘n’ Roll Hall of Fame. While the value of the hall itself is debatable, we all know they should be enshrined with their peers. Maybe their trajectory was different, but they left an indelible imprint on pop culture, more so than many bands that were "real" from the start.

The guys have forged a musical and emotional connection with countless fans through the past 50 years. The bond is pretty intense and rivaled only by the affection and reverence felt by Beatles fans.

It looks like the Monkees got the last laugh on those snarky journalists and know-it-alls.