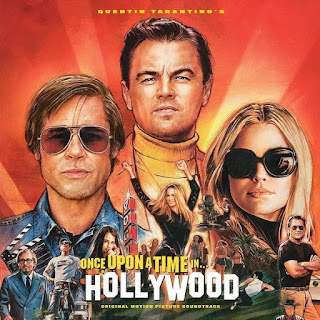 By now, most people who want to see Once Upon a Time…In Hollywood have made a trip to the theater, some of them several times.

The film’s 2 hours and 41 minutes long, and every plot point and scene has been analyzed and discussed online for the last month No one’s going to spend so much time nitpicking over a boring movie. Even people who didn’t like the movie (except for the ending) will still talk about it.

The film is intensely personal to some, a unique film for movie nerds to ponder, or a nostalgic trip for others. OUATIH is a favorite of QT fans (at least the ones who don’t expect non-stop violence) and people in their 50s and 60s were alive in 1969,  younger folks interested in 20th Century pop culture, or anyone interested in the Manson family.

I’ve read about people seeing the movie at a theater eight times, though two or three seems to be the most prevalent number of return viewings. (I've seen it twice; going for #3 at the New Beverly later this month.)

Regular movie goers who just choose a random name from movie listings for their weekend entertainment will not like this film. Most people see movies as escapist entertainment; they don’t care about plot or acting or historical accuracy. They want constant action, sex, or gore, two hours of bish-bam-boom before going back to the job and family.

The second time I saw the movie, the audience was too quiet  - not a gasp or “Oh, my God”, during the ending. No laughter. I didn’t see anyone rush out or give the finger to the screen, either.

I was worried about screaming or making noise during the ending the first time I saw it. Maybe I should bring a piece of gauze with me and bite down on it near the end, I thought

I wasn’t alone. Most people at the sold-out screening I attended gasped, laughed and clapped during the end scene. Those last 20 minutes have even made their way onto YouTube two months before the DVD release. Several other scenes that appear to have been filmed right off theater screens are on YouTube as well.

The best five seconds of the film for just about everyone, including the impatient and undiagnosed ADD crowd, occurred when Rick walked out with the flamethrower. The element of surprise left the audience laughing and gasping.

Here’s a round-up of audience reactions.

There’s a lot to see in second and third viewings.  Los Angeles in 1969- what’s not to love? The music, the TV shows, the commercials, billboards, and marquees. Even minor details that would go unnoticed by most moviegoers were authentic to the era. One newsstand contained copies of magazines from 1969 (or thereabouts). The newsstand, much less the magazines, would go unnoticed by all but the most eagle-eyed viewer.

This is a hangout movie, a bromance, that girls can love. (You should have heard the women next to us hoot their approval when Brad Pitt took his shirt off.)

The Cliff-Rick bromance is all good. It doesn’t have any cliché arguments, fights over girls, etc., common as plot twists in lesser films. It’s nice to have real human characters to root for, instead of the half-human, half-infallible superheros.

Oh, No! Not Another Western!

I almost forgot how prevalent TV Westerns were even in the late 1960s. Bonanza, the Wild, Wild West, Gunsmoke, the Big Valley and Lancer (yes, it was a real show) shared the TV Guide schedule with Laugh-In and the Smothers Brothers.

“Oh, no,” I remember thinking before seeing the movie “How am I going to get through the Western scenes? It’s going to be excruciating. I’ll have to go out for popcorn.” Leo’s performance drew you in, and there was "Don't cry in front of the Mexicans" for comic relief.

The first two hours flew by, Westerns and all, and before you knew it, Tex, Sadie and Katie showed up – only to be quickly dispatched by our heroes. 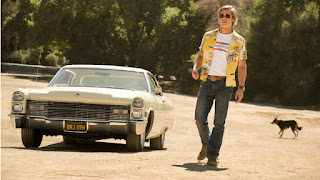 Anyone who has who has lived in California can identify with the driving scenes. Everything was easier back  in '69, even driving on L.A. freeways. There was no road rage, texting, drive-bys, or distracted driving. You could drive with the windows down, the radio blaring, and the wind blowing through your hair.

I don’t think people have done that with abandon since the early ‘90s. Yeah, you can ride in your air-conditioned Porsche listing to the shoegaze station on Sirius, but it’s not the same.

There are snippets of several lesser-known pop songs in the movie. “Summertime” by Billy Stewart, “12:30 (Young Girls are Coming to the Canyon”) by the Mamas and Papas, “Baby It’s You” by Smith, even a snippet of Robert Goulet singing MacArthur Park on a TV. And plenty of Paul Revere and the Raiders.(Terry Melcher and Mark Lindsay lived at 10050  Cielo Drive before Sharon and Roman moved in.)

The film creates an atmosphere, a time and a place that you can soak in and lose yourself in. I wouldn’t say there’s no plot - it's just a plot that simmers along on low heat.

It’s fun to catch glimpses of old-timey TV shows like Mannix and The FBI. Notice Paul Revere and the Raiders were on the TV at Spahn Ranch when Cliff walks in to see George.

And feet!! How many pairs of many bare, dirty female feet do we need to see? I haven’t done a count yet - maybe once it comes out on DVD. Sharon takes her go-go boots off – to put her feet on the back of the seat in front of her, Pussycat puts her bare feet on Cliff's dashboard, etc. Now, lots of hippie girls were barefoot in LA in the late 60s, so we’ll let Quentin slide this time.

And of course, there’s the quotable dialogue -

“No, it was dumber than that.”

“And you, you were on a horsie”

“Are you real?”
“Real as a donut, motherfucker.”

“Is everything all right?”
“Well, the hippies sure aren’t.”

And it's never revealed if Cliff  killed his wife on purpose. His wife (played by Rebecca Gayheart) seems like a garden variety nagging wife in her five seconds onscreen.  Perhaps the subplot was inspired by  DJ Humble Harv (of radio station KHJ) who shot his nagging wife dead in 1971.
(Humble Harv appears on the soundtrack introducing songs and reading commercials.)

You want a happy ending for all the good people and you get it here. The comic book violence of the last 20 minutes is even more satisfying if you’re familiar with the Tate-LaBianca murders. It’s cathartic to watch Sadie get burnt to a crisp. The head-banging times 12, is cringe-inducing, no matter how many times you watch it.

Right after all that violence, we see Rick's dream come true (he gets to hanging out at Roman and Sharon's house), and sweet, pregnant Sharon greets him. And now everyone gets all misty-eyed after cheering during 10 minutes of hardcore gore.

Now leaving the theater feeling happy isn’t usually the sign of a great film. Art films are supposed to leave you dazed and pondering. Blockbusters and superhero movies leave viewers feeling like they just got off an intense, 120 mile per hour roller coaster ride –and they forget about it by the next day.
But giddy and excited to the point where you say “I have to see that again,” the moment you walk out of the theater?. That doesn’t happen too often, at least not to me.

It’s not so much that you rewatch the movie for thrills – it’s to find tidbits you missed out the first time. There’s the sound of the canned dog food plopping into the bowl is familiar to anyone raised on supermarket food in the late 20th Century. (It took a second viewing to notice the rat and raccoon flavors.) The marquee on of the Van Nuys Drive-In (Lady in Cement starring Frank Sinatra and Raquel Welch), the quick shots of Rick involved in a DUI on Hollywood Boulevard, or taking a  swig from a blender full of margarita while telling off the dirty hippies.

Margot Robbie gives us a chance to see Sharon Tate as a real person. Too many people know her only as a murder victim. This film humanizes her. She doesn’t have a lot of dialogue, but her luminous presence is the heartbeat of the film.

The other non-Manson Family female characters are tougher.  Julia Butters’ Trudi character gives us a glimpse we get of the new, liberated woman – or girl. She prefers to be called an actor instead of an actress and corrects Rick’s pronunciation of a character’s name. Zoe Bell (as a stuntwoman) gives Cliff a verbal beatdown, truncating his best two out of three with Bruce Lee.

Cliff’s visit to Spahn Ranch  turns tense the moment Pussycat (Margaret Qualley) gets out of the car. The long shot of Cliff walking away as the girls boo him made you think something horrible would happen.

Cliff beating up Clem was especially satisfying to those of us who lived through the summer of '69, and it’s a precursor to the tables-turned ending.

People can be emotionally invested in TV series characters; we see them for years, week after week. It’s harder to get attached to a movie’s characters, unless they’re superhero or franchise characters.

Many people on YouTube and elsewhere wonder about what would happen to the characters after this movie ends. Would the police go to the ranch and arrest Charlie and the Manson girls before they could commit more mayhem? Would Rick work on a film with Polanski?

Once Upon a Time in Hollywood will probably be the Tarantino film I watch and enjoy the most over time. However, I don’t think it’s his best film. I’d have to go with Pulp Fiction, Jackie Brown and Inglorious Bastards as the Top 3, with the True Romance screenplay getting an honorable mention.

Once Upon a Time in Hollywood is fun – the music, the cars, the clothes, and the alternative ending where everyone lives happily ever after, except the murderous hippies. Given the state of the world now, we need some alternative history before going back into an ever-worsening reality.
Posted by JadeB at 6:09 PM