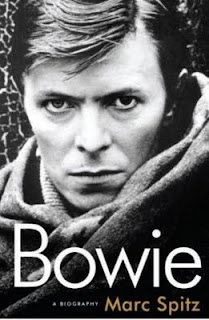 Writing an icon’s biography must be a daunting task. You have scads of material to sift through and an adoring public ready to criticize any false turn you may take regarding said idol.

That was evident with the biographies of John Lennon and Michael Jackson. Then some rock star biographies have so many career twists and turns to cover, any controversy is just gravy. Marc Spitz's book Bowie: A Biography is one of those books. Spitz explores David Bowie's chameleon-like personas, from Ziggy Stardust to Aladdin Sane to the Thin White Duke. David Bowie championed reinvention long before Madonna. Rock journalist Marc Spitz, (whose last rock bio was about Green Day), obviously did a lot of research via magazines, other books and original interviews. Tony DeFries, whose management company ran Bowie’s career in the 1970s, and other characters that passed through Bowie's life, are recounted. Spitz reveals long lost, gossipy tidbits from Bowie’s past, among them, a party at a disco in DJ Wolfman Jack’s house.

There’s a dizzying amount of rock ‘n’ roll history here. Bowie publicist and all-around rock chick Cherry Vanilla explains “You had to be on, on,on” Perhaps that’s where all the cocaine came in handy during the mid-'70s.  Spitz covers Bowie's "lost" years in L.A, his friendship (and work) with Iggy Pop, the filming of The Man Who Fell to Earth, and his notoriously erratic (and rumored cocaine-fueled) debut TV appearance on the 1974 Dick Cavett Show.

Many of the events in Bowie’s life merit a full recounting; the Ziggy Stardust/glam rock era is explored in-depth, but there’s not a lot of detail after the mid-'80s. Spitz’s account recaps Bowie’s career but offers little insight into the man and what makes him tick. There’s always a family tragedy in the lives of most rock stars, and Bowie’s story is no different. Spitz details David’s relationship with his older half-brother Terry — who helped inspire David’s musical beginnings — in the first few chapters. Terry committed suicide in 1985. David's wild, open marriage (and bitter divorce from first wife Angie) is the only off-stage scenario that gets much attention, and the obligatory first chapter about his childhood. We get a sense of the journey, but Spitz doesn’t give us a sense of Bowie's off-stage persona or tie together the recollections and make sense of them.

Spitz conducted no new interviews with Bowie himself, but interviewed Bowie cohorts like photographer Leee Black Childers, Cherry Vanilla, ex-wife Angie Bowie, Joey Arias, Peter Frampton, Spider from Mars Woody Woodmansey, and a whole cross-section of Bowie associates. So there’s no shortage of juicy stories and behind the scenes' minutiae.

However, Spitz does relate a few stories of his own life as a Bowie fan. He saw Bowie hailing a cab in NYC, but didn’t approach him. Sidetracks like this in a biography are fine if they’re  short and add to the point. In Bowie: A Biography, they happen a bit too often.

Despite a few shortcomings, Bowie: A Biography packs a lot into its hefty 448 pages. That’s more than enough to jog the memory of any Bowiephile and lead to more memories not extensively covered in the book. Remember Bowie's duet with Cher on her TV show? I know, you’d rather forget.