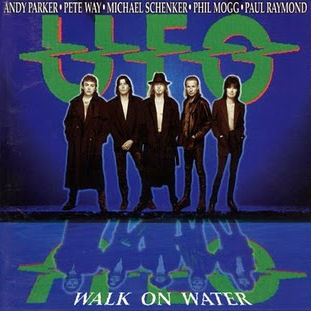 I discovered Walk On Water a few months ago after cruising Youtube for UFO videos. The first studio album with Michael Schenker on guitar since 1978 eluded me when it was first released. That’s probably because Nine Inch Nails and alt-rock were my chosen musical milieu at the time. Had someone told me UFO and Schenker were back together, I would have dismissed the information with “Are those guys still around?” Ahh, the follies of youth.

Now wiser and more open minded, I decided to listen to the album. I wasn’t expecting much, because the facts didn’t sound promising. A 1970s hard rock band’s classic line-up reassembles 17 years later, reuniting guitarist and singer who hated each other; the musical climate has changed, leaving hard rock forgotten by the mainstream; you’re older, they’re older, and so on and so on. It seemed like a set up for disappointment.

Boy, was I wrong! You know what happens when you assume. Walk On Water is a fitting follow-up to Obsession, the last Schenker-era studio album. Produced by Ron Nevison, who helmed Lights Out, Strangers in the Night and Obsession, this album packs a wallop. The classic‘70s lineup is here -  Schenker, Mogg, Way, Raymond and Parker. They all hung around for a few years of touring except Parker, who was replaced by Simon Wright for live shows.

Schenker’s guitar playing on Walk on Water is as mesmerizing as ever, reeling you in from the first crunchy riff on the album opener, “Self-Made Man”. It’s like time stood still. The song is an indictment of greedy businessmen, with fierce vocals to match on the verses, and a softer, meditative chorus. This song has some of Mogg’s best lyrics and it’s become one of my favorite UFO songs. “Venus” is an ode to the ups and downs of love, with a pristine, melodic solo from Schenker. 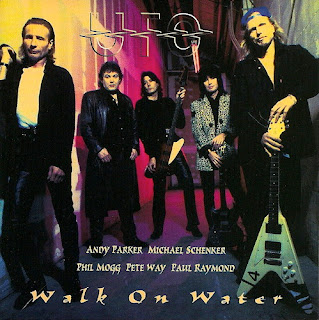 The songs deal with more grown-up concerns, as the band members were around mid-life crisis age in 1995. “Pushed to the Limit” rages against the sands of time going through the hourglass “My doctor says it ain't right/For a man my age to fight”, Mogg proclaims, not ready for the rocking chair by a long shot. Schenker’s razor-sharp riffs are a perfect complement to the lyrics. “Running on Empty” covers the same subject matter with a bit of romance and sexy, bluesy guitar. The evil ex wife in “Knock,Knock” gets the house and the car and is back for more.

“Dreaming of Summer” is a haunting tale of an unemployed man watching his life slip away.  It’s a real-life scenario a lot of people can identify with, balanced by Schenker’s tasteful acoustic guitar. It’s WOW’s “Love to Love.” Spiritual and uplifting despite the title, “Darker Days” is melodic rock at its best – once you hear it, it’s hard to get it out of your head.

“Stopped (By a Bullet of Love)” seems to be about picking up and falling in love with a girl at a bar. What inspired it?  Never ask about a song’s backstory, just enjoy it. You may discover things you’d be better off not knowing. And what’s that bit about Arizona? Didn’t Schenker live in Arizona for awhile?

There are new versions of “Doctor Doctor” and “Lights Out” to end the album, but why try to improve on perfection?

I find myself playing this as much as Obsession or Lights Out. Despite the album’s quality, I have no interest in listening to the two reunion albums that followed - the one side live/one side original album Covenant and the all-original Sharks. The latter sounds a little too Spinal Tap-ish for my comfort, so I think I’ll quit while I’m ahead.

Twenty years have passed since Walk on Water. The reunion ended in the early ‘00s because, as the saying goes, insanity is doing the same thing over and over and expecting different results. 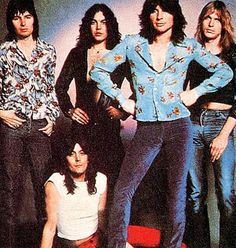 Late 1970s UFO
Everyone’s doing great staying far away from one another as they enter their (semi) retirement years. Pete Way beat cancer and he’s working on his solo album, and both Mikey and UFO are touring non-stop. We have more musical output and nobody is getting punched in the stomach or storming offstage.

Present-day UFO fares well with Vinnie Moore on guitar, but that je ne sais quoi (we know who that is) is missing. The synergy between Mogg, Schenker, Way, Raymond and Parker was absolutely electric back in the day. Another reunion is unlikely, but we’ll always have our memories.