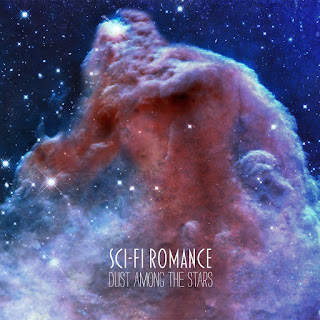 The new album by L.A. based alt-folk band Sci-fi Romance, Dust Among the Stars, creates a somber landscape that pulls you in without depressing you. The songs make you think more than brood, and ultimately, show a glimmer of hope. Another strong effort, it’s just as thought-provoking as Kotrla and company’s previous releases, including …and surrender my  body to the flame and The Ghost of John Henry.

Singer-songwriter Vance Kotrla finds inspiration in found film, horror movies and quirky pop culture. There’s a sense of this, of the atmospheric and the unusual, on Dust Among the Stars, even when the songs themselves don’t deal with those subjects.

Most of the songs on Dust deal with love, the uncertainty of life – normal fodder for pop and rock songs, but the presentation gives it a depth not found in many rock releases.
“If I Fell”, combines pop love song sentiment underscored with somber thumping rhythm. This gives it a haunting charm that’s neither mainstream nor pure Goth. “Everything Burns” reflects on the lost love and the passage of time, with Jody Stark’s plaintive cello emphasizing the message.

“Pale Blue Dot”, inspired by a photo of Earth taken by Voyager I, puts man’s place in the universe in perspective.(“All we are/ all we’ve ever been/ a pale blue dot on the head of a pin”) The track is dedicated to astronomer Carl Sagan.

“Shakespeare’s Lovers” features guest vocalist Kristen Vogel , an opera singer whose performed with St. Petersburg Opera and the Asheville Lyric Opera, among others. Her soulful but tender soprano brings this tale of star-cross lovers to life. She also adds vocals to the romantic “Let’s Run”, her warm, reassuring voice meshes with Kotrla’s baritone. The closing ballad “When You Wake”, consisting of only guitar and vocal, has the quiet comfort of a lullaby.

Dust Among the Stars is the most accessible of the Sci-Fi Romance CDs, but that doesn’t mean Vance Kotrla has lost his edge. On the contrary, Sci-Fi Romance is just tapping the surface of their capabilities.

You can watch the video for “If I Fell” on YouTube