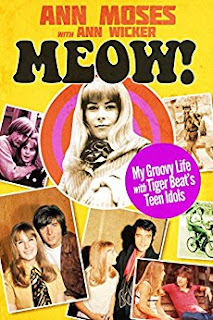 Before the internet and social media, teen girls found out about their favorite pop star crushes from teen mags like Tiger Beat, 16, Star, Flip and lesser-known fly-by-night publications. Meow! My Groovy Life with Tiger Beat’s Teen Idols by Ann Moses (with Ann Wicker) gives us a first-hand account of what it was like to work at a teen mag in the freewheeling 1960s and early 1970s.

Ann Moses wrote for Tiger Beat from 1965 to 1972,  as their groovy girl on the street, interviewing music and TV stars for the teen set. Along the way, she had a free pass to many of the iconic music events of the ‘60s, including the Monterey Pop Festival and the taping of Elvis Presley’s 1969 Comeback Special.

With a forward by Bobby Sherman, and lots of encounters with every teenie-bopper idol from back in the day, Meow name-checks most of the recognizable pop stars/groups from the '60s/'70s, from Davy Jones, Mickey Dolenz, David Cassidy, Mark Lindsay to lesser-known musicians of the time. (Remember Dino, Desi and Billy or Sopwith Camel?)

Moses talked her way into interviewing the Dave Clark 5 in 1965 after a gig at a theater across from her day job at . (In those days, it was possible to wander backstage without being vetted by a security team.)

This impromptu interview lead to an unpaid gig with a mimeographed zine called Rhythm ‘n’ News. Moses interviewed James Brown, the Beach Boys and others for this homespun publication. Soon after, she started working part-time for Tiger Beat and quit her job at . Moses went from pouring orange juice as a counter girl to hanging out with the Who, the Stones, the Monkees, Paul Revere and the Raiders and other popular bands.

Originally called Lloyd Thaxton’s Tiger Beat after the based dance show host in 1965, but Tiger Beat soon dropped Thaxton’s name. Some stories were written by a staffer, taking on the persona of an enthusiastic young fan who didn’t exist, but with Moses on staff as a reporter, they now had the real thing. 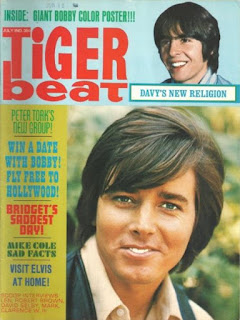 Tiger Beat and other teen mags weren’t exactly fake news, but they did de-sensationalize certain information to make stars seem squeaky-clean. Tiger Beat kept it G-rated for girls in grade school and junior high, omitting mentions of drugs or alcohol and rumors of trysts between unmarried people.

The writers kept stories to favorite colors, favorite foods and other innocuous subjects. Stories about life back at home with the family and show-biz shenanigans, sometimes punctuated with lots of exclamation points (!!!!!) were mandatory. Siblings, parents and friends offered information about the stars, often illustrated with baby pictures and childhood photos.

Moses writes of chatting with a polite Mick Jagger and smoking pot for the first time under the tutelage of the Jefferson Airplane. Moses’ experiences were fun but businesslike, with pot smoking the only vice and one or two musicians making untoward advances.

Tiger Beat’s newfound success gave the competition jitters. Gloria Stavers, 16 Magazine’s 40-something editor, resented sharing interviewees with the upstart based magazine. She ordered Moses to get off the Raiders tour bus one day in , claiming it was her turn to interview the band.

While 16 still did a respectable business, the bands responded better to a female reporter closer to their own age, not to one as old as their Moms. Teen girl readers could live vicariously through Ann’s adventures.

Tiger Beat staffers also had more access to the actors and rock groups, as it was based in , where most TV shows, movies and records were produced. (Stavers and 16 Magazine were based in .)

Eventually, Moses did date a pop star. She had a sweet, whirlwind courtship with the Bee Gees’ Maurice Gibb, and visited to meet his Mum and Dad. This section goes on for a bit too long, but who can blame Moses for reliving her first love, especially when it was with a pop star. Unfortunately, the fairytale romance came to a rather abrupt end, with a female pop star as the villain in the scenario.

After moving up the ranks to become an editor at Tiger Beat, Moses discovered she only made half as much as the male editor of the newly-christened Rona Barrett’s Gossip magazines. Now married to a civilian (i.e., a non-celebrity), she left the magazine and journalism  to raise a family and never looked back until now.

Unfortunately, Tiger Beat didn’t survive into the 21st Century. The magazine disappeared in the 1990s after being sold to a now-defunct company called Primedia (one of my former employers).