Book Review: Set The Night On Fire: L.A. in the Sixties by Mike Davis and Jon Wiener 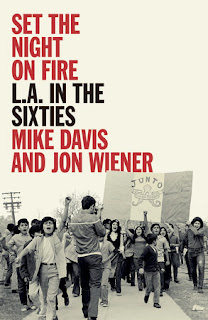 Set The Night on Fire:
In the Sixties
By Mike Davis and Jon Weiner

It’s been 50 years since the shootings. On , four students –
Allison Krause, Jeffrey Glen Miller, Sandra Lee Scheuer, and William Knox Schroeder were shot and killed by National Guard Soldiers. The incident was just one of the high profile events that symbolized the social unrest of the 1960s and early 1970s.

A few key images come to mind when you think about the  antiwar and civil rights era. Martin Luther King’s I Have a Dream speech, the marches in Selma, the 1968 Democratic Convention in Chicago, the Black Panthers, the assassinations of President Kennedy, RFK, and Martin Luther King.

But every city and college town had its own political and social movements. Some of these groups were truly underground, while others appeared in local newspaper articles and made their presence known to the police and the “establishment.”

Set the Night on Fire, an ambitious study from Verso Books covers the left-wing socio-political movement in in the 1960s and early 1970s.

The book was written by two respected journalists long affiliated with the counterculture.  Mike Davis was a member of the Communist Party in in the 1960s and a local organizer for the Students for a Democratic Society. His previous books include City of . Jon Weiner hosts the Start Making Sense podcast   He wrote Gimme Some Truth about the FBI files on John Lennon.

Set the Night on Fire gives us a well-rounded look at the growing fight for the rights of women, gays, African-Americans, and Mexican-Americans in the 60s’ as well as the anti-war movement. Many of the events and organizations mentioned in the book have been lost to history and relegated to newspaper archives.

The Stonewall riots in ’s  is the most famous example of  demonstrations at a gay bar in the 1960s, and it brought gay rights into the mainstream media. The New Year’s Eve raid at Black Cat Tavern in Silverlake in 1967, and the subsequent uprising predated Stonewall by two years but is rarely mentioned today. Many people have affixed the colorful LOVE stamp on letters at one time or another. This design, created by Sister Corita Kent of the Immaculate Heart of Mary in Los Angeles,  was one of the counterculture silkscreens. The Sister used her art partially to protest the Vietnam War and other social issues.  Her stance caused problems with the L.A. Archdiocese’s conservative leader, Francis McIntyre. She met with anti-war activist Father Daniel Berrigan,created a silk screen inspired by the Watts Riots, and exhibited her art all over the world. She left Immaculate Heart in 1968 and continued making art. The iconic LOVE stamp was issued in 1984.

Liberal media was relegated to occasional public access TV shows or public radio.
The public radio station KPFK first broadcast its blend of unorthodox cultural and news programming that appealed to the beatnik crowd in 1959.  The first shows included performances by Pablo Casals and poet Kenneth Rexroth Other programs featured interviews with Aldous Huxley, Alan Watts, and programs opposing the Vietnam War. The station broadcast the first news reports from . The station even sponsored one of the first Renaissance Pleasure Fairs to raise funds. The station is best known however, for airing Tania (Patty Hearst’s) manifesto shortly after she was kidnapped by the Symbionese Liberation Army in 1974. 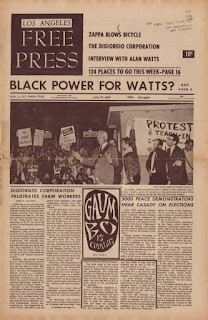 The L.A. Free Press, first published in 1964, was distributed in coffeehouses and streetcorner vending boxes. It covered local elections and protests, popular culture, the music scene, and even had a sex advice column. The paper’s staff was instrumental in organizing events, including  a black neighborhood forum in and various concerts. Unsurprisingly, the FBI, the police, and other powers-that-be tried to close down the offices or accuse the press of publishing pornography.

The two most familiar musical happenings in to out-of-towners, 1972’s Wattstax and the Sunset Strip riots, have short chapters here. Wattstax was part of a week-long festival that had been held yearly since the Riots in 1965. The 1966 riots on Sunset Strip were a reaction to the curfew established on the Whiskey and other clubs on the Strip. The musicians and teen club-goers considered this an assault on their rights. The ensuing demonstration by teens resulted in many innocent protesters being beaten by cops.  For more detail about the riots, read Dominic Priore’s excellent Riot on the Sunset Strip: Rock ‘n’ Roll’s Last Stand in Hollywood

While white middle-class kids rallied against nightclubs being closed early, black and Chicano youth were dealing with more substantive issues. In , Chicano high school and college students fought for their rights to a better education, more jobs, and as a protest against unfair school policies. Around the same time in early 1967, students at a mostly black high school near downtown walked out to protest unfair conditions.

By the time the exploded in 1965, poor black people had been subject to search and seizure for the slightest real (or perceived) infraction. When the police arrested  Marquette Frye, a parolee for reckless driving, a scuffle ensued. Frye’s arrest looting and rioting began in the commercial section of and spread throughout the area. During the riots, over 3,000 people were arrested and hundreds of businesses were looted or burned.  Davis and Weiner break down the events day-by-day, with a chapter and follow it up with a chapter on the McCone’s Commission’s report on the riot’s underlying causes.

Protests against the Vietnam War accounted for the biggest swath of demonstrations across the country, and LA was no exception. On , while a fundraiser was being held for President Lyndon B. Johnson inside the hotel, over 10,000 protesters congregated outside. The police ordered the crowd to move back; the crowd was packed so tightly many of them couldn’t move. Cops swung at the crowd with batons, striking men, women, and a mother with a baby in a stroller, according to eyewitness accounts. The mainstream press headlines the next day made it sound like the police responded to a violent mob that had attacked them.

Media in the ‘60s was slanted towards the powers-that-be, with the hippies portrayed as the Godless enemies of the people.  All you have to do is look at the raw footage from the 1968 Democratic National Convention in Chicago to know this was an ongoing, nationwide thing back then.

Set The Night on Fire provides a comprehensive overview of how every disenfranchised group in in the ‘60s fought for their rights. The represented groups include Asian-Americans, Hispanic-Americans, African-Americans, hippies, rock musicians and gay people. The information is all the more potent when you realize that these events occurred in less than a decade. The seeds for the most notable social and political changes in the late 20th Century took place between 1965 and 1973.

The book shows how rapidly society was changing, with interlocking movements challenging the status quo despite resistance. Old-guard politicians like L.A. Mayor Sam Yorty and Governor Ronald Reagan weren’t going to give up power easily, but the die was cast for the progressive politics of the late 20th and early 21st Century.


At over 800 pages, Set the Night on Fire may be too detailed for many readers. However, it is an indispensable tool for students of history, civil rights, and sociology.