Some Initial Comments on "Get Back": Peter Jackson's Documentary About the Beatles' 1969 Recording Sessions 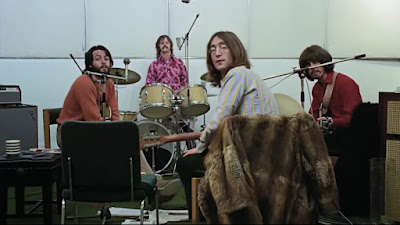 Beatles fans flooded Facebook and other social media sites with reviews of Get Back , director Peter Jackson's eight-hour documentary about the Fabs' 1969 recording sessions and rooftop concert, over Thanksgiving weekend. Lots of people who would otherwise never dream of sitting through eight hours of any film on Disney + subscribed to watch Get Back. (Unless you have a grandkid or two, Ice Age, endless Muppet and Star Wars movies, or Wreck-It Ralph, are probably not on your to-watch list.)

Musicians and other creative people will find most the recording, jamming, and songwriting sessions fascinating. Causal fans and “normal” people. not so much.

Viewer advisory: Tobacco use (and copious quantities of tea and toast)

Part 1 plods along, but stick with it, things get more interesting when the band moves to Apple studios and Billy Preston joins them.

If you’re a causal fan or easily bored, you may want to stick to Part 3 only. If you get *really* bored easily, the rooftop concert starts an hour before the end of part 3.

Ringo offers comic relief with his fart comment. No one in the studio seems to pay much attention to it, however.

Heather wasn’t taking any of John’s BS (“You don’t eat any cats! They don’t taste good!” ) and it was cute when she imitated Yoko’s caterwauling.

Yoko didn't cause any trouble, contrary to the myth. She just sat there (mostly silent) next to John, except for her trademark "singing" during an informal jam.

Who would have guessed that “Get Back” started out as a protest song about the anti-immigrant movement in the UK.

The police investigating the rooftop concert had a Keystone Cop vibe about 'em - but they were very polite.

John and Yoko had just finished filming Rock and Roll Circus with the Stones, thus John's running gag of, "And now your hosts for this evening, the Rolling Stones."

Also, John didn’t seem to wash his hair much during this time. Ringo looked like he skipped the shampoo a few times, too

Some people have complained that they didn't like the interviews with pedestrians gazing up at the rooftop, but I enjoyed this exchange:

John stops playing when Mal tells him about cops on the roof. When Paul sees the cops, he gives an enthusiastic  “Wooo!”

George helping Ringo work on the chords for "Octopus’s Garden".

Paul playing the melody for what would become "Let it Be" while everyone else mills about.

And Yay!!! A music documentary without Dave Grohl or Bono putting in their 1 1/2 cents!